Last October, we attended a local re-enactment of the Civil War. We got to walk around and the kids got to learn a little history. We came to a demonstration of the medicine practiced during that time and how wounded soldiers were operated on by doctors. It was pretty scary.

Let’s just say, you wouldn’t want to go in for a cut because chances are you’d lose a limb and it was not the most sterile of environments. 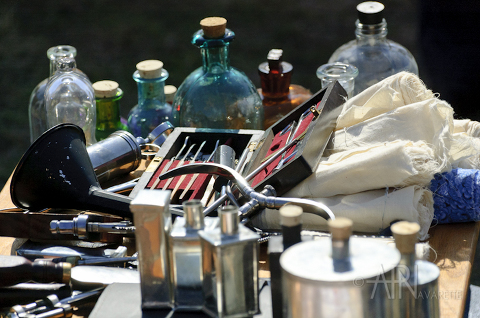 This photo is a collection of the tools and bottles a doctor might have readily available during the Civil War era. Bottles filled with chloroform or alcohol; knives previously used on other patients and covered with their blood; a doctor’s surgical kit; and I guess that cloth was either used as gauze or just rags to help sop up all the blood. Yuk. So happy we live in the era of modern medicine. Medicine has come a LONG way.